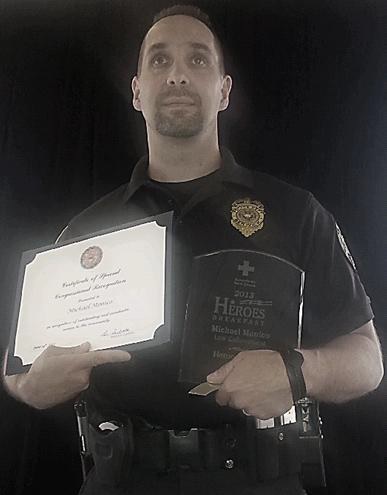 On June 14, 2013 the Columbia County District Attorney, Thomas E. Leipold, presented Sergeant Michael A. Monico Jr. with the “Law Enforcement Award” at the 5th Annual American Red Cross Heroes Breakfast. Monico was nominated for this award because on May 12, 2012, after a Methamphetamine “One Pot” explosion caused a disastrous fire at a four apartment complex on Summerhill Avenue, Monico kicked in a door and rescued a sleeping tenant from a smoke filled apartment. Sergeant Monico responded to the situation without any hesitation, demonstrating courage and dedication to duty. His courageous and selfless conduct reflects the ideals and core values of the Borough of Berwick Police Department and deserves the recognition and appreciation embodied in this award.